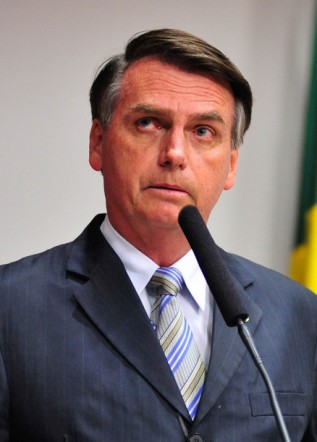 It has been a week since the election of Jair Bolsonaro and the new President-elect is wasting no time in pushing forward his extremist agenda. He is working closely with Brazil’s outgoing President Temer to fast-track radical attacks on pensions alongside a serious assault on civil liberties before he formally takes over the Presidency on 1 January 2019.

The mainstream press in Britain have presented Bolsonaro’s victory as a complete landslide, sweeping away a Brazilian left that is portrayed as having suffered a final, historic defeat. It is true that Bolsonaro’s support in this election was very substantial with over 57 million votes. But the left’s candidate for President, Fernando Haddad, secured 47 million votes, concentrated in the poorest sections of Brazilian society. This vote reflects the deep social roots that the left has in Brazil and indicates that it will continue to be a huge factor in Brazilian politics. In fact the left has already made clear its intention to resist Bolsonaro’s government, with the tens of thousands of people taking part in the first anti-Bolsonaro protest just two days after the election on Tuesday 30 October.

The leading force of Brazil’s left is the Workers Party, which works alongside a number of other left political parties, trade unions, social movements and progressive organisations. It is this left, in its vast numbers and variety that is facing immediate, physical threats to its existence from a President-elect who has promised to “banish”, “exile” and “jail” its leaders and supporters. He declared that Lula da Silva, who would have beaten Bolsonaro in the election had he not been falsely imprisoned by Brazil’s conservative courts, will “rot in prison” under his Presidency.

Brazil’s President-elect is a fascist. Whether Bolsonaro will be able to construct a fascist regime in Brazil is a different question however. Creating a fascist regime involves physically destroying democracy, the labour movement and all political opposition through violence. This would mean the elimination of the left’s 47 million voters as a factor in Brazilian politics. The level of resistance against Bolsonaro waged within Brazil and the amount of international solidarity such resistance receives will play a decisive role in preventing the catastrophe of a fascist regime taking hold of the world’s fifth largest country.

It is precisely because of the strength and deep roots of Brazil’s left that Bolsoanro’s first priority, in collusion with the coup-President Temer, is to attack civil liberties in order to weaken the capacity of resistance to his government.

In Bolsonaro’s first interview after the election he said that he intends to treat social movements as terrorists, singling out the Landless Workers Movement, and stating that he is not interested in having any sort of dialogue with civil society. New legislation is currently being debated in Brazil’s Congress which could allow for peaceful demonstrations against the government’s policies to be deemed a terrorist act as well as giving the police further powers to imprison and persecute people. There are also concerns that a decree issued by the current President Temer on 15 October 2018 to create an ‘Intelligence Task Force’ involving the army, Air Force, Navy, Federal Police and the government could be used against democratic peaceful demonstrations critical of the government by defining these actions as organised crime against the state.

The horrific wave of violence unleashed by Bolsonaro’s supporters during the election campaign saw left wing activists, women, LGBT people, black people and journalists physically assaulted and murdered. In his first interview following the election Bolsonaro said that new gun laws – to give citizens the right to carry weapons – would be a priority. An escalation of violence, including the formation of armed fascist death squads to target the left, is a real danger that threatens to further increase Brazil’s high rate of homicides, which last year stood at over 63,000.

Bolsonaro has also launched an attack on freedom of the press. He declared that mainstream newspaper Folha de S.Paulo is “over” and said that he will ensure public funding is withdrawn from the publication in a move which is being criticised as an exercise in censorship. Bolsonaro’s attack on the Folha is politically motivated – the paper exposed to the role international and Brazilian companies were playing to support of his election campaign by spending millions of dollars to send hundreds of millions of Whatsapp messages attacking the left’s Presidential candidate with slanderous and inaccurate material. This spread of “fake news” was a decisive factor in Bolsonaro’s last minute surge in the opinion polls throughout September and October. His support doubled during this period.

Alongside Bolsonaro’s aggressive attacks on civil liberties, he has already started to pursue his austerity offensive. He has declared his intention to work with the current President Michel Temer to approve a massive attack on the pensions of public sector employees before he takes office in order to, in his own words, “avoid problems for the future government.” The proposed attacks on pensions are very unpopular and the left intends to mount opposition within Congress and to mobilise people onto the streets in order to stop these attacks from being imposed. The attack on pensions is just the beginning. Bolsonaro’s economic plan is currently being drawn up by University of Chicago-trained economist Paulo Guedes, and it’s a plan which includes eliminating some of Brazil’s 23 ministries, the privatisation of dozens of state-controlled firms and sacking thousands of civil servants.

The left opposition in Brazil require immense international solidarity to support their resistance against Bolsonaro’s attacks on civil liberties, democracy and living standards and also in their campaign to free Lula da Silva from prison.

In Britain, the Unity Demonstration Against Fascism and Racism taking place on 17 November will be an opportunity to register opposition to Bolsonaro and the Brazil Solidarity Initiative’s launch meeting in Parliament on 20 November will be an important occasion to discuss building solidarity with progressive movements in Brazil defending equality, democratic rights and social progress.

This article was first published in the Morning Star on Saturday 3 November 2018.